Lebanon Picture Frame & Fine Art Gallery will be featuring two “en plein air” artists, Jonathan Frazier and Paul Gallo, bringing the spectacular year to a close for the last month of 2017. The two featured artists are current members of the Harrisburg area outdoor oil painting group “Seven Lively Artists.” The group has been in existence for over sixty years, with nineteen active members. The pair has been in many juried shows and museum exhibits together over the years, including the Lebanon Valley College Spring Juried Exhibition, the Cape Cod Museum of Art, The State Museum of Pennsylvania, and more. The artists’ opening reception is First Friday, December 1st, from 5 to 8PM.

Jonathan Frazier grew up in Dillsburg, PA and begun his formal art education in high school, where he attended the Harrisburg Arts Magnet School, and then later the Maryland Institute College of Art and Kutztown University, where he was awarded his BFA. His latest body of work includes oil paintings of the Susquehanna River and other more distant views of the coast of Maine and the Shenandoah mountain range from recent trips. Although many of these paintings begin on location, they take on a life of their own, transformed through the artist’s expressive use of vibrant color and atmosphere. Frazier’s painting sensibilities are also influenced by his experience as a multi-instrumental musical performer. In September, Frazier expanded his repertoire and painted his first outdoor mural as part of the Sprocket Mural Works’ “2017 Harrisburg Mural Festival.”

Paul Gallo enjoys utilizing the tactile quality of oil paints and paints in a representational manner. Inspired by all things visual, his primary area of interest is painting en plein air. Though he humbly claims that his work is purely representational and “nothing profound,” his confident brushstrokes gently guide his viewers out of the moment and into his serene landscapes. Gallo was born in Philipsburg, PA and now works from his home studio in Middletown. He attended the Art Institute of Pittsburgh, HACC and then obtained a BFA from Syracuse University. Working to perfect his craft, Gallo has also participated in many workshops with renowned artists throughout the years and hosts workshops of his own. He currently teaches college level painting, drawing and design at HACC. 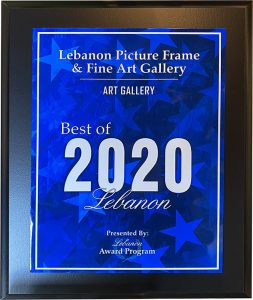